For the first time since the Second World War the RHS Chelsea Flower Show 2020 has been cancelled to save lives during the pandemic. This year’s RHS Chelsea Flower Show will be a virtual event with many exhibitors and Chelsea flower show gardeners sharing content online. We are sad not to be at Chelsea for the first time in years and we know how gardening is a life line to many people at the moment. So, instead we are joining virtual Chelsea flower show with an exclusive interview with multi-award winning garden designer John Everiss. A designer known for pushing the boundaries of sculpture gardens and someone we have worked with at RHS Chelsea to create his artisan garden. Here are his tips on design, materials and bringing a stories to life through his gardens. Read our interview and get inspired to create your own imaginative garden space.

Over the years you have exhibited a wide range of gardens at the RHS Chelsea Flower Show, which has been the garden you have enjoyed creating the most and why?

I would have to say the last one I created, the D Day 75 Garden. I am fascinated by history of both World Wars and with the stories of the relatives involved, so it really struck a chord. This garden was to commemorate 75 years since the Allied Forces landed in Normandy. It was humbling to have the opportunity to both invite veterans on to the garden during the show and to be invited to rebuild it afterwards in Normandy. This was something truly memorable. Also because my garden was in the grounds of the Royal Chelsea Hospital it was not judged like the other show gardens, which was a liberating and a far more pleasurable experience!

John Everiss’ D-Day garden at the Chelsea Flower Show to commemorate 75 years since the Allied landing in Normandy.

Which was your most challenging RHS Chelsea garden?

Definitely the Myloma Garden in 2018. I had the idea to create a large head and shoulders sculpture to bring the story of Myloma to life using individually cut perspex pieces. It became apparent that there were immense technical difficulties involved to creating something of this scale! Especially with a sculpture that had to be moved multiple times and ended up weighing over 6 tons! Delays in production meant that the giant sculpture  went together for the first time at Chelsea…not ideal! It proved just as difficult to take apart, but I have to say it looks amazing at its permanent home at the Hospice of St Francis in Birkhamstead. 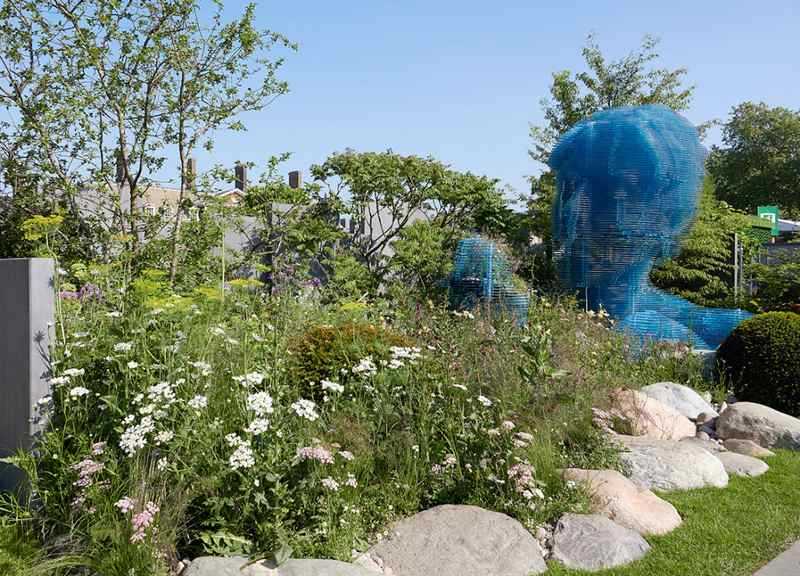 How do you plan your garden designs? What’s your starting point?

The design must always start with what the client wants from it. In general design it would be how they want to interact with the space i.e.  seating, views, textures, colours. At Chelsea, the client is the sponsor or charity so it will be the story or message they want to convey. Quite often they have taken a giant leap of faith and my job is to guide them through the process and create a garden that has immediate impact and connects with the viewer.

You use many diverse and often unexpected materials in your gardens, what is your favourite material to work with and why?

I would have to say metal. It’s such an adaptable material that can be bent, shaped, welded, polished or allowed to rust. You can create something that is incredibly robust or has a feeling of lightness and transparency. The D Day sculptures I recently made are already changing to their clifftop, seaside environment with small streaks of rust appearing which will change their appearance over time.

John’s D-Day 75 garden in Normandy after The Chelsea Flower Show.

If you could use any item from Chilstone’s range in your garden design what would you use and how?

It’s got to be planters. So useful to create focal points and the sandstone textures act as a great foil to the plant foliage. Being based in the North West, I work at many beautiful sandstone/limestone country houses which sit wonderfully well with these.

You often use your space at Chelsea to highlight the plight of individuals, how do you find your stories?

Its so important to personalise the story you are trying to create. If you can tell the story of an individual, the visitors are taken on a journey that stays in their memory. When I design gardens for charities I always work with them and make a list of who might like to be involved in the project. Some like to be more in the background and help behind the scenes, whilst other are happy share their story and become the sculptures! In the case of the Evaders Garden in 2015, I was able to tell the story of my fathers wartime experiences and thank the people that helped him. It was a profoundly moving experience, one I’ll never forget and always be proud of. 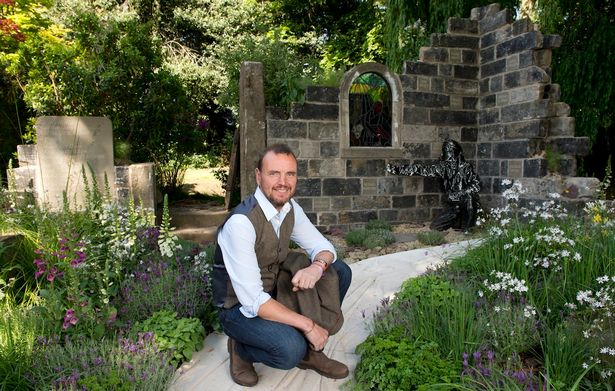 The Meningitis Now Artisan Garden in 2016 received a strong emotional response from the general public and it was voted the winner of the People’s Choice Award, did you expect it to have such a strong impact?

You hope it will, but you never know. This garden turned into something quite special. Meningitis strikes out of the blue and can kill or have life changing effects in a short space of time, quite often with young people. The statues were all based on real people to share their story of having the disease. The garden became a cathartic experience for visitors affected or have lost loved ones. There were lots of tears, but it was also very inspiring.

How do you evoke such emotion from the small plot of land available at the Chelsea Flower Show? ​

Firstly I try to use the space wisely and I don’t over complicate it. In the artisan gardens, the space is tiny so you must draw the viewers eye to the corners or back wall which creates the impression of an elongated plot. Secondly, the story must have a big visual impact. This is where sculpture plays such an important part and what I have become known for. 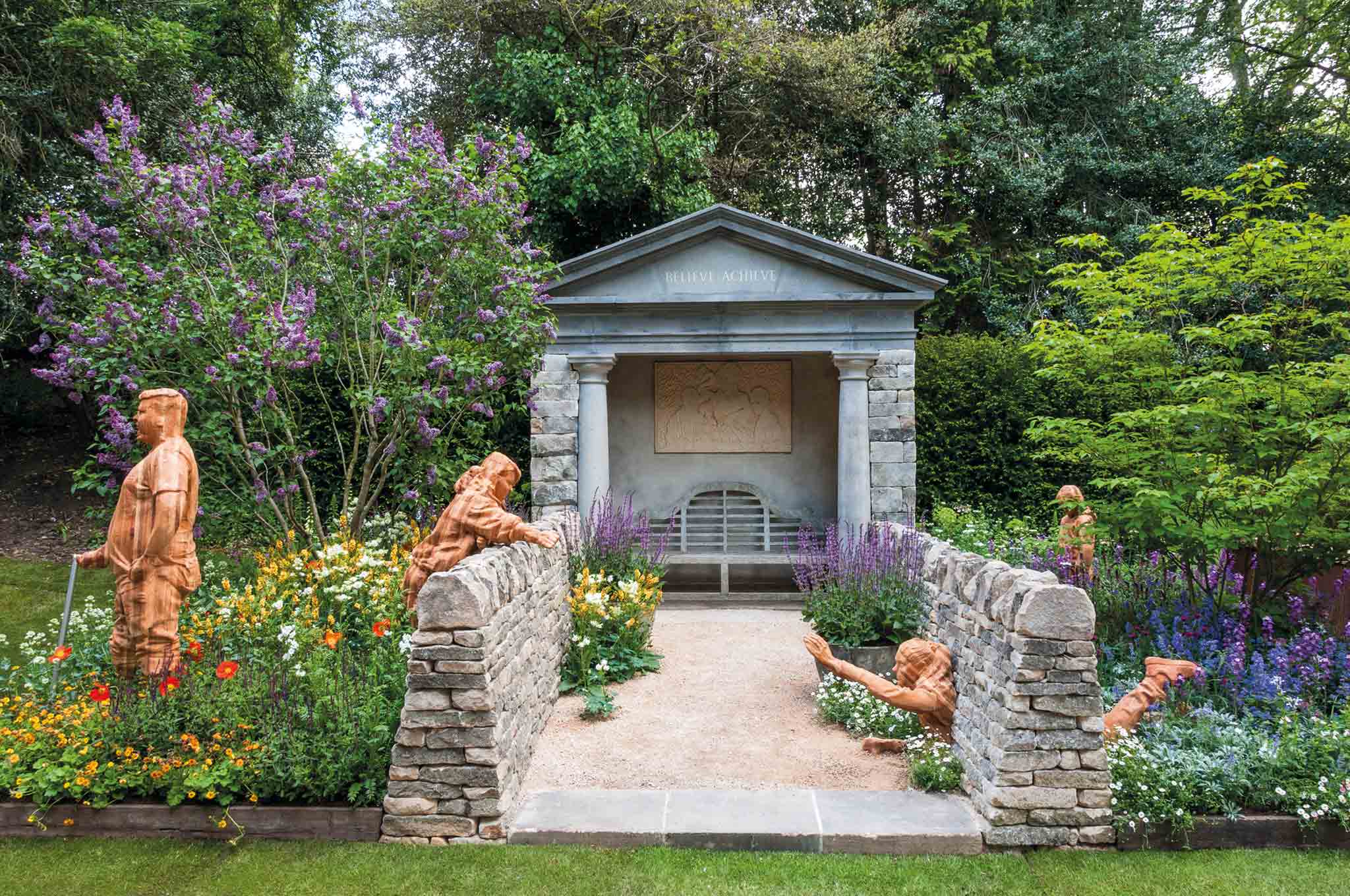 What is your favourite RHS Chelsea Flower Show garden that you have seen over the years, who created it and what was special about it?

Impossible to pick one garden. I do really like Chris Beardshaw’s style. He uses hard landscape/buildings well and his planting is always a stunning combination of texture and colour. Above all they are also usable, practical spaces. That’s not always the case at Chelsea! 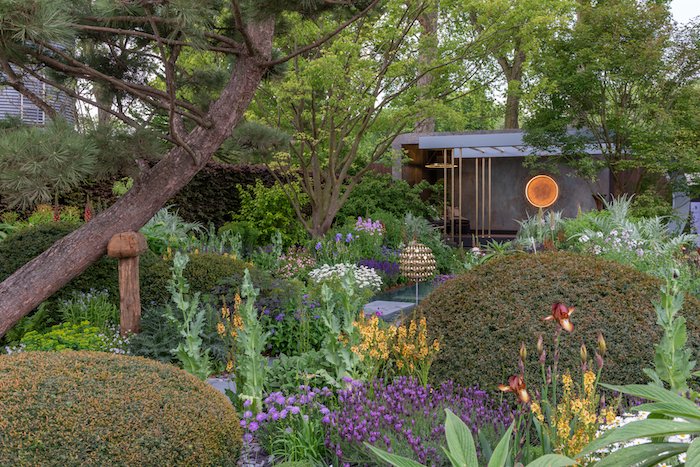 Which garden designers and artists inspire you?

Love Antony Gormley’s work, right up my street. I remember watching a documentary some years ago about Anish Kapoor which really inspired me to get off my backside and start making stuff. The garden designer would be Piet Oudolf. Simple, understated, but beautiful planting.

What will you miss about Chelsea Flower Show this year?

​I’ll miss not being able to see the other Chelsea flower show gardeners and friends I’ve made over the years. I quite often only get to see them at Chelsea so I was looking forward to chatting as a visitor to the show and not an exhibitor this year. When you build a garden, you get caught up in a little bubble and sometimes miss the bigger picture so this year was going to be more relaxed.

Will you be exhibiting at Chelsea next year and what have you got planned?

No plans as yet, but you never know. Chelsea is very addictive, where else can you build giant blue heads, D Day landing beaches and let your imagination run wild! 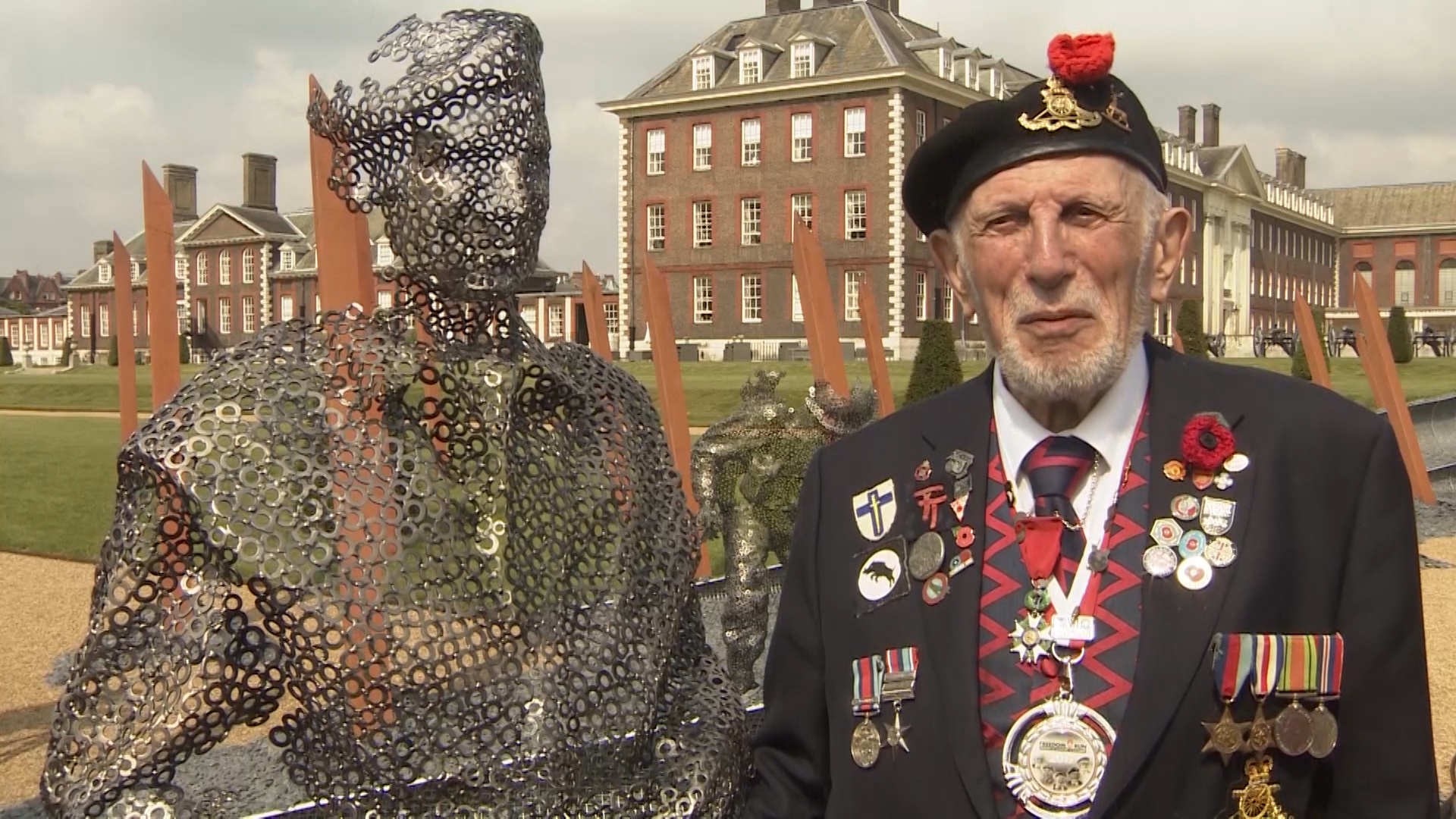 War veteran stands beside a sculpture in the D-Day 75 garden at RHS Chelsea Flower Show.

What is your favourite feature in your own garden?

I have a a tiny garden full of left over bits from Chelsea…not a design as such. I suppose my favourite feature would be the giant oak chair I made for my kids when they were young. Being reclaimed by nature now, but has many happy memories of them growing up.

What have you been doing in your own home or garden during lockdown?

Actually since Chelsea last year I took a few months off to build a new house, DIY on a giant scale! Luckily I’ve been able to continue working on this as well as garden design. On the downside we have had to pause the sale of our present house so are stuck between the two. Anyone that knows me, knows that my true joy in life is physically making my ideas into reality. I find the design process quite tortuous sometimes, but once I come up with the finished idea the adrenaline gets going and I can’t wait to build it.

What trends do you predict will be big in gardening over the next few years?

I hope after this horrible virus pandemic, there might be more emphasis on sustainability and affordability. Gardens don’t have to be hugely expensive, just creative and imaginative.

Thank you very much John for an insight into your experiences at the RHS Chelsea Flower Show over the years. We look forward to your next design!

Watch this space for more content in our virtual RHS Chelsea Flower Show!

Our team worked with a builder and property developer to recreate Victorian period features for a row of new build terraced houses. These were created to replace homes that were…